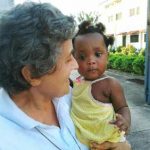 It was December 1991. Even though many years have gone by since then, something happened on that occasion that struck me so deeply it has always remained in my heart.

I was in Kisangani, Congo, and the city was under siege. It had been invaded several days earlier by a horde of soldiers, dressed for war. Chaos, looting, fear and death reigned everywhere.

All the people had retreated to their homes and locked their doors. The city was like a ghost town. Our FSP compound was located on the edge of the main street and, like everyone else, we were barricaded behind closed doors, two of us in the book center and one (myself) in the house. Nobody had the courage to leave their homes or even look out a window to see what was going on in the streets. The repeated crack of gunfire filled the air and the whole population trembled with fear. The soldiers were going from door to door, forcibly demanding especially religious communities and parishes to hand over their means of transportation.

At a certain point, the gunfire ceased and silence pervaded the city but no one ventured out. The only people in circulation were the soldiers. Finally one of the sisters in the book center mustered enough courage to creep to the front gate of our compound and open it a crack to assess the situation. Everything appeared to be calm. But then, without warning, a group of young soldiers appeared. They were heavily armed, looked like they were on drugs and clearly had sinister intentions. The sister quickly tried to shut the gate but the soldiers were faster. One of them stuck out his booted foot to keep the heavy metal gate from closing.

So there she was: face to face with armed soldiers with bloodshot eyes and ugly looks on their faces. The second sister in the book center, seeing that her companion was in danger, ran out to help her. The soldiers were trying to force their way into our compound, insisting that we hand over our car.

Alone in the house, I also came out but luckily the soldiers did not see me so I was able to quickly go back indoors. Terrified, I ran to the chapel, fell to my knees and raised my hands to heaven in supplication, praying with great fervor, “Prima Maestra, save us!” I repeated the plea over and over again, because what else could I do but pray? If the soldiers got into our compound, they would never leave us alive, and if by some miracle we did survive, we would be in very bad condition.

The two sisters at the gate told me later that at a certain point the eyes of the soldiers cleared and they left without a word. The sisters ran straight to the chapel and the three of us hugged one another, tears of joy streaming down our faces because a life-threatening situation had been averted. 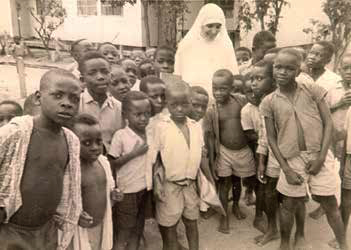 Thank you, Prima Maestra, for your presence among us on that occasion! Thank you for saving us! Only God knows how many times, in the days that followed, you remained discreetly alongside us, continuing to protect your daughters of the Congo.

I never knew you,
but I heard many sisters speak about you.

I never knew you,
but I read a lot about you.

I never knew you,
but I saw and felt
the penetrating gaze of your beautiful eyes.

I never knew you,
but I heard about your prayer life,
your humility and your faith.

I never knew you,
but I will tell the new generations of Paulines
about you.