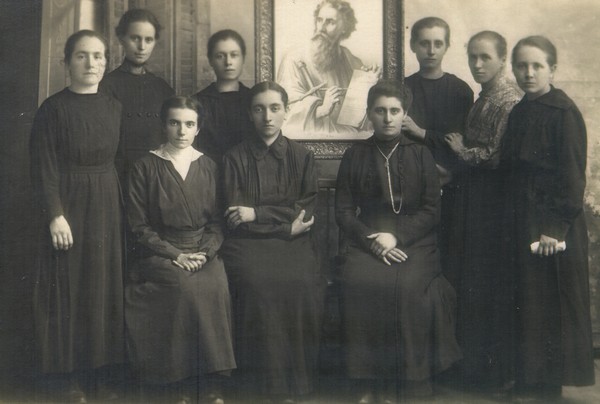 Ever since the FSP Special Chapter (1969), the title “Co-Foundress” has been used to define Maestra Thecla (cf. Chapter Documents, the Constitutions, etc.) and it is the official title used for her in her cause for beatification, which opened in 1967. When Fr. Alberione was alive, Fr. Stephen Lamera, the Postula­tor General of Prima Maestra’s cause, wrote:

M. Thecla was not only the Superior General and Co-Foundress of the Daughters of St. Paul, she was a true Mother to each of her Daughters and to the whole Pauline Fam­ily. In fact, through her advice, prayers and works she helped everyone: priests, semi­narian and students of the SSP. But above all she offered great support to the Pious Disciples during the delicate time of their beginnings and early development. She did the same for the Pastorelle Sisters, the Sisters of Mary, Queen of Apostles and the Pauline secular Institutes. All the Pauline Congrega­tions owe her their immense gratitude for carrying them in her big, motherly heart and for all the sacrifices she made for them, re­gardless of the cost to herself.1

The Acts of Prima Maestra’s beatification process confirm the legitimacy of this title. Indeed the Positio super virtutibus of 1988 records that when a Daughter of St. Paul declared that it was not correct for Maestra Thecla to be called the Co-Foundress of the In­stitute, the Rapporteur of her Cause refuted this objection, saying:

According to the Catholic Encyclopedia, a co-foundress is a woman who played a sig­nificant role in what the [Institute’s] Founder accomplished. And from the very beginning Maestra Thecla played an important role by collaborating in a substantial way with the Congregation’s Founder in the formation of its members, in its development, in the prep­aration of its Constitutions, and in every act carried out by the Institute from 1922-1964.

During the assembly held to examine wheth­er or not she practiced the virtues to a heroic degree, all the participating theologians re­ferred to Maestra Thecla as the Co-Found­ress of the Daughters of St. Paul. In summa­rizing the various interventions, the General Rapporteur of her cause defined her as:

a great woman, a perfect religious, an en­lightened co-foundress, open to the needs of our times, but also a humble and faithful ex­ecutor of the divine will, who during her life sought only and always to expand the glory of the Lord and do good to souls.

The majority of the participants in the FSP Special Chapter had also participated in the beginnings of our Institute and they de­clared:

Prima Maestra was a faithful executor of a significant part of what the Founder con­ceived of for the Daughters of St. Paul. Those of us who lived with her can witness to the fact that she was indeed extremely faithful in this regard. In the beginning, things were not clear. The Church had not yet given her imprimatur to the Congregation and the instruments of social communication were not yet viewed in the light in which they are today, after Vatican Council II. Thus it was not easy to implement the Founder’s ideas. Yet Prima Maestra did this–not blindly but intelligently, seeking to launch the initiatives presented to her by Primo Maestro. Conse­quently we can say with a certain degree of confidence that Prima Maestra Thecla merits the title “Co-Foundress” of the Daughters of St. Paul. (This proposal passed by unani­mous vote: 80 “yeses”).

On many occasions, Fr. Alberione highlight­ed the role of Maestra Thecla in the Congre­gation. On 11 January 1925, during a council meeting, he clarified: “The Theologian su­pervised the beginnings of the House; now he is its advisor. Whatever is requested of him, your Maestra [Thecla] should also know about.” When he celebrated the 50th anni­versary of his ordination to the priesthood, Primo Maestro said: “I prayed for all of you. I know that all of you, everywhere, follow Prima Maestra and this is everything. In fact, it is your way to holiness and the apostolate. Afterward, we will all be together in heaven.”

“Great things… done in the style of God”

Also significant is the testimony of Sr. As­sunta Bassi, who lived with Maestra Thecla for almost forty years:

[M. Thecla] guided the Congregation for 48 years and succeeded in cementing its members and communities among them­selves with a strong sense of belonging. She was the soul of its organization and apostolate. She left ample breathing room for initiatives but she was also vigilant, if necessary reminding everyone of essential principles.

Her life could be defined by the word fidel­ity. She was a woman faithful to God and to her vocation. With great spontaneity and simplicity, she allowed God to work in her and he accomplished great things through her.

We witnessed these things but were un­aware of just how remarkable they were because they were done in the style of God.