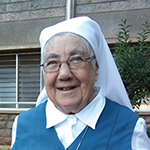 The Daughters of St. Paul opened their first book center in Youngstown, Ohio (U.S.A.), in 1946. Since the book center was in my neighborhood, I often went there to visit the Sisters and help them. This contact helped me discover my vocation. On 1 Sept. 1955, when I was 16 years old, I entered the Congregation in Derby, New York, which at that time was the circumscription’s central headquarters and also its house of formation.

Toward the end of that month, Primo Maestro and Prima Maestra Thecla visited the United States and Derby was their first stop. It is hard to describe the joy and emotion we postulants felt at the thought of meeting our founders. At that time there were only about 6 or 7 professed sisters in Derby, while the postulants numbered about 20. As a result, we were able to enjoy the company of Prima Maestra “up close.”

Each postulant was able to speak personally with Prima Maestra and experience her maternal tenderness. She took a great interest in our personal life stories and our families. When she visited the technical apostolate, she was very happy to see many young women working at the various machines.

Later, Fr. Alberione and Maestra Thecla visited our other communities. When they reached Youngstown, they went to see my parents, who owned a dry-cleaning shop. Afterward, my mother sent me a letter telling me how happy she and my father had been to receive that visit. She wrote that when my father noticed that Primo Maestro’s suit was very wrinkled because of all the traveling he had been doing, he made the Founder take off his suit and wait while he pressed it. If only my father had known he was ironing the clothes of a saint! 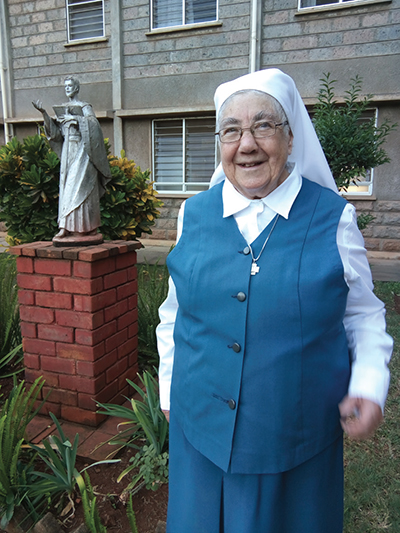 I made my first profession in 1958 in our circumscription’s new central house in Boston. When Prima Maestra visited the Daughters of St. Paul of the United States once again in 1959, most of the sisters in Boston were out on propaganda or working in the book center during the day, so those of us at home had the opportunity to really enjoy her presence. At lunch every day, I had the privilege of sitting at the same table with Prima Maestra, where I closely observed everything she said and did. Sometimes, in chapel, I would kneel next to her and I was always struck by how recollected she was in prayer.

Almost every evening after supper the whole Boston community would gather around Prima Maestra, who told us about Rome and the different countries and communities she had visited. She also listened with great interest to our stories about our families and our childhood years.

After breakfast each morning, the sisters going out on propaganda would line up in front of Prima Maestra, who blessed them by tracing a cross on their foreheads. Even though I was not one of the propagandists, I would also sneak into line for her blessing.

Every day, Prima Maestra would visit the technical apostolate to see what works were in progress. I was running the printing press and at that time we were printing 30,000 copies of the Bible. When she reached the press, she traced a cross on my forehead and then another one on the printing press, asking me how things were going.

When it was my turn to speak to her privately, she asked me about myself and my family. Even though I spoke Italian very poorly, she understood me and when our conversation ended she wrote a note on the back of a holy card, encouraging me to become a saint.

The Daughters of St. Paul had just opened a house in the Congo and Prima Maestra told us about what life was like for our sisters in far-away Africa. She asked if any of us would like to be a missionary. I burned with desire to say yes, but since there were still so few FSPs in the United States, I did not have the courage to raise my hand. Little did I know that my desire would be fulfilled 25 years later! In fact, in 1985 I was asked to go to Nairobi, Kenya to help train the postulants to print and bind the small books the new circumscription had begun to publish. Paulines Publications Africa has made a lot of progress since those days and the Lord has truly worked miracles through our apostolate!

Maestra Thecla made her last visit to the United States in 1962. Because her health was not good, she did not visit the local communities but remained in Boston the whole time. Instead, the Sisters took turns going to Boston to visit her and, as always, she made time to speak with each sister personally. That was the last time I saw her.

I will always treasure my memories of Prima Maestra. Whenever I am in need I always turn to her because I have great trust in her maternal help and protection.

I recently celebrated my 60th anniversary of religious profession among the Daughters of St. Paul. I thank the Divine Master for all the graces he has bestowed on me over these many years, including the grace of meeting and getting to know our dearest Prima Maestra Thecla, whom I pray we will soon be able to honor with the title “Blessed.”