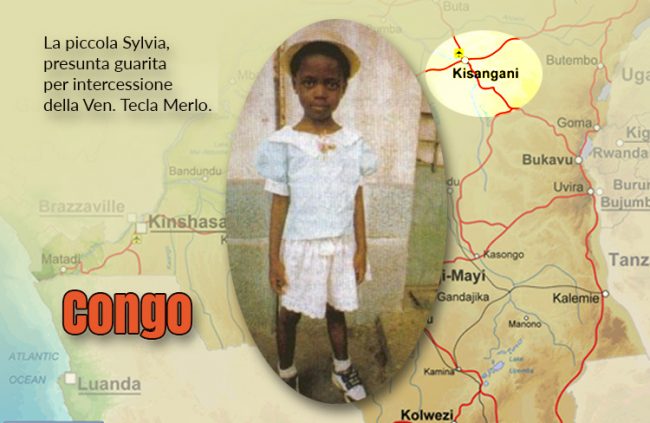 Sylvie is a beautiful 7-year-old whose family lives near our convent. She is an only child but her father’s relatives spend a lot of time with her and her parents. Her father, Katambu Zefirino, lost his job because of the ongoing civil war in the Congo. Her mother, Ilunga Liliana, left her job as a teacher because none of the teaching staff had been paid for several years. She met the economic needs of the family by raising chickens.

We saw this young family from time to time ever since Sylvie was very small. Even though they are Christians, they know nothing about the consecrated religious life. In fact, not long ago, Sylvie’s mother said to me: “I don’t know anything about nuns or about what you do in your convent.”

Sylvie was born on 4 May 1995 here in Kisangani. She has the face of an angel and a sweet mile, even though she has already lived through three wars, fought one after the other over the past three years in this part of the country. A lot of other families, some of them very large, live in the same compound as Sylvie’s family and many of the children often come to our place to see if the fruits on the trees in our garden are ripe enough to pick and take home with them.

On 13 January, some of the children came to our door and said: “Sylvie is very sick. She has meningitis.”

I hurried to her house. Her relatives told me the child was at the local Alabul clinic, which lacks so many essentials that it bears no resemblance to European clinics.

I went to see Sylvie and found her lying in bed, burning with fever. Her father told me that he had spent four days going from hospital to hospital, trying to find one that would accept his daughter as a patient for the meager fee he could afford to pay.

I took Sylvie’s dry, hot hand in mine and when her father confirmed that she had meningitis, I couldn’t hold back my tears. I asked the nurse what treatment they were giving her. She said that the child was receiving injections, followed by cold baths to reduce the fever. I know that meningitis is often fatal, especially for children in this part of the world, and that even if they recover, the disease leaves serious consequences. I knelt down beside Sylvie’s bed and her father did the same. Together, we prayed fervently for her, knowing that only God could answer our ardent pleas.

A little while later, Sylvie’s father told me that during the night his daughter had continually asked him to send someone to get me. She wanted me to sleep close to her because she felt so sick. But by the time I arrived at her bedside, she was no longer able to speak.

I slipped a picture of Prima Maestra Thecla under the child’s pillow and told her father to pray with faith, asking God to heal Sylvie through the intercession of Sr. Thecla, who loved children very much. I returned home and the rest of the sisters in my community joined me in praying earnestly for Sylvie’s healing.

The following day, I hastened to the clinic to see how things were going and to my amazement I found the child sitting up in bed, eating a piece of bread with one hand and holding the picture of Maestra Thecla in her other hand. Is it possible? I asked myself in amazement Yes, it was possible because Sylvie was smiling at me. Overcome with emotion, I hugged her joyfully. Her voice was as weak as a thread but she was alive! She showed me the picture of Maestra Thecla and her father said that when she had awoken she had insisted on holding the picture in her hand and that she looked at it constantly. Sylvie herself later said that when she woke up Maestra Thecla was sitting beside her, praying just like she was in the picture.

One thing was certain: Sylvie was out of danger. Her father took her home from the clinic that same day because the daily fee was just too expensive for him. But over the next few days he took his daughter back to the clinic on his bicycle, even though she was very weak, so that she could finished the cure that had been prescribed for her. The shots she received were very painful but she never complained because she had been told that she could offer her sufferings to God as a powerful prayer to obtain peace for her country and for the world.

By the end of the month, Sylvie was back in her second-grade classroom. And most days, as I walk home from morning Mass, I often hear a little high-pitched voice call out, “Good morning, Sister!” When I turn around, I see the face of this very special angel who was healed by God.

I want to thank the Lord of Life for answering our fervent prayers through the intercession of Sr. Thecla Merlo. Thank you, Jesus Master, for having protected Sylvie, this little flower of the vast Congo!