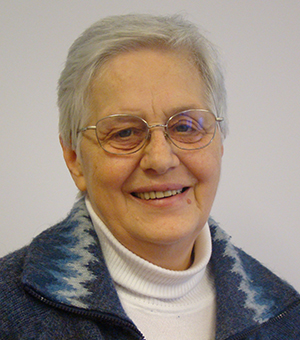 My life in the Congregation has been full, rich and I dare say “fortunate,” or perhaps “graced” is a better word. I have met a lot of people who “built” me not so much by what they said to me, but by the example of their lives, which helped to shape my own. And among those people, the one who stands out above all the rest is Maestra Thecla.

Before I entered the Congregation, the Daughters of St. Paul in Mestre, my hometown, were having some problems with their house and I asked my father if I could help them out before leaving for Rome.

Several months later, I ran into Prima Maestra Thecla one afternoon on my way out of the Queen of Apostles Sanctuary in Rome, after my hour of adoration. The little I knew about her was what the sisters in our Mestre community had told me about her. But she stopped me like a person who had unexpectedly encountered an old friend, and exclaimed: “Greetings from your father and mother! Come with me.” With that, she took me to her office, motioned me to take a seat in a small wooden chair alongside her desk, and opened the bottom drawer of that desk. It was filled with chocolates and assorted sweets, which at that time were rare in the convent. She invited me to choose what I liked while she told me how she had met my parents during her visit to Mestre. Afterwards she sent me on my way with the words, “Come and see me once in a while.”

I left her office walking on a cloud. Prima Maestra was our Superior General, but…she was normal! She hadn’t acted like the person in charge of the whole Congregation, responsible for the well being of so many sisters and so many apostolic activities around the world. She had smiled at me and told me about what she was doing and the people she had met on her trip. In short, she had established a relationship with me. In our brief time together, I had not felt like I was an insignificant member of a big group of aspirants. She had focused her attention on me personally, no one else!

Sr. Giovanna Grandi, who at that time was my Aspirant Mistress, had said in one of her conferences to us that we were not permitted to have conversations with the professed sisters, but that we were always free to speak with the superiors without having to ask permission to do so. And I took her at her word. So, for me, Prima Maestra Thecla’s invitation, “Come and see me,” was like receiving a gilt-edged invitation to her office. I promptly (intentionally?!) forgot that she had qualified that invitation with the words: “once in a while.”

At that time, some of the professed sisters were studying philosophy, and it had been decided that it would helpful for me to take the same course. Usually there were only three or four aspirants in the room we used for our study periods. When I knew that Prima Maestra was in her office, I would quietly sneak out of the room, cross the garden that divided the building of the professed sisters from ours, and drop in to see her. She always greeted me with a smile that made me feel warmly welcomed and that I interpreted as, “I’m glad to see you!”

She would offer me the same little chair near her desk and tell me about the people she had met on her trips, about the Congregation’s apostolic activities, about the beauty of our apostolate, which had reached lands I had never even dreamed of and which broadened my narrow horizons…. Sometimes she told me about what she had reflected on during her morning meditation, or else she would recount a story or two about her life…and I would drink it all in! She would also encourage me to talk about myself, asking me why I had wanted to become a nun and why I had chosen to enter the Congregation of the Daughters of St. Paul, since I had been taught by nuns and was familiar with other religious institutes. She asked me if I liked the religious life, what I thought about it, how I got along with the other aspirants and what things were important to me…. I realized only later that it was like having a personal formation mistress at my fingertips!

Prima Maestra’s words were simple, her examples concrete, her suggestions practical and, above all, “do-able.” She insistently said (and this became the maxim that has guided my life): “Be yourself, your real self. Change only if the Lord asks you to do so, not to please others or because they suggest it. And be open with your Mistress: she is your guide on this new road that you are not yet familiar with. The Lord will show you how beautiful this road is, even though you may encounter sufferings because, in him, even those are beautiful–but after that, heaven!” She would end our conversation at a certain point, saying: “Now I have to write some letters, but you can just sit here and read.”

After this happened once or twice, I learned to bring my philosophy book along with me and I would spend the rest of my time with her studying.

One day, on my way back to my own building, I ran into my Mistress, Sr. Giovanna. “Where have you been, Gianfranca?” she asked me. Feeling like I had been caught red-handed, I replied with a stammer: “I-I went to see Prima Maestra.” And she replied: “You are free to go to see her whenever you want, but make surenot to disturb her too much.” My Mistress obviously knew what I had been doing!

In my naivety, it had never occurred to me that Prima Maestra was such a busy person that it wasn’t possible for her to dedicate a lot of time to me. In fact, Sr. Giovanna, with the frankness typical of her native region (Modena), had already exclaimed on several occasions: “Gianfranca, you look smart but you are such a dummy!” And she was right! After all, I was only an aspirant and I was causing Prima Maestra to waste time! Nevertheless, she always seemed happy to see me and I think she really was. She chuckled when I told her about our efforts in class to try to distract our philosophy teacher from his lecture by deliberately asking him questions designed to get him off track. But even though she found our antics amusing, she always ended her laughter with the admonition, “Try not to do that anymore.” Like I said, she seemed to be such an ordinary person, in spite of her exceptional role in the Congregation!

Another exceptional thing about Maestra Thecla was her gaze, which penetrated me profoundly and made me strive to be better. She made me feel loved in spite of my shortcomings, even when I told her about my escapades with another aspirant, Matilda, my cohort in mischief-making. I found Prima Maestra also exceptional in the way she was able to grasp not only my needs of the moment, but above all what I would need for the future.

She was the great inspiration of my life, even though only my Mistress, Sr. Giovanna, knew it. It was very obvious to her whenever she glimpsed my shining eyes. It took only one question from her and I would pour out all the details of my latest visit with Prima Maestra, down to what kind of candy she had offered me!

I was a junior professed sister (a “suorina” as we were called back then) during Maestra Thecla’s final hospitalization at Albano. After she died, I considered the rich storehouse of my memories of her to be her “last will and testament” to me. I have tried to put her advice into practice in my life–a little clumsily, I have to admit, but I’ve done my best!