With joy I leave this space to Signora Anna, who wrote a very moving letter to share with us what happened to her husband, who, through the intercession of Maestra Thecla, received the great grace of healing.

It was just a few days before Christmas–the end of a difficult year for us. My husband had undergone a heart operation that the doctors had very little hope would have a good outcome and he was not feeling well– he was losing weight, was almost unable to move and was running a fever every day. On 21 December 2012, we received a phone call from Monaldi Hospital in Naples informing us of the results of the PET scan my husband had taken. The diagnosis was bleak: he had cancer of the lymph nodes. I felt desperate–my husband was already suffering so much and now this! It was too much for him and I would have been happy to take his place. I did my best to hide my grief because I didn’t want my husband and children to have to bear the burden of my anguish in addition to the load they were already carrying. And that is how things stood on the morning on which I came face to face with Sr. Thecla.

I happened to pick up a leaflet that bore one of her thoughts, reminding me that God is our Father. I immediately began to pray to her very fervently. I could feel Sr. Thecla’s tangible support; it seemed as if she were praying with us and for us. I had no doubt that she had placed us in God’s hands and I was equally sure that my husband would be cured. Indeed, at that moment, I felt that he was already healed. After a long time, I was once more serene, pervaded by very sweet and wonderful feelings.

I told my husband about this change in my emotional state and shared with him my conviction that he would soon be healed. His first reaction was to tell me to keep my feet on the ground. But I urged him to pray for healing and he began to do this earnestly. Hard times lay ahead. In the weeks that followed further tests confirmed the initial diagnosis. Then, when my husband was hospitalized in Naples and things looked darkest, he suddenly began to feel better and ulterior tests revealed that the cancer had mysteriously disappeared. The doctors said it was unexplainable.

My husband and I are convinced that we experienced the merciful hand of the Lord at work through the intercession of Sr. Thecla, and our “friendship” with her intensified. I want to underscore that this experience was above all an interior one rooted in prayer and that it has drawn my family closer to the Lord and his love. 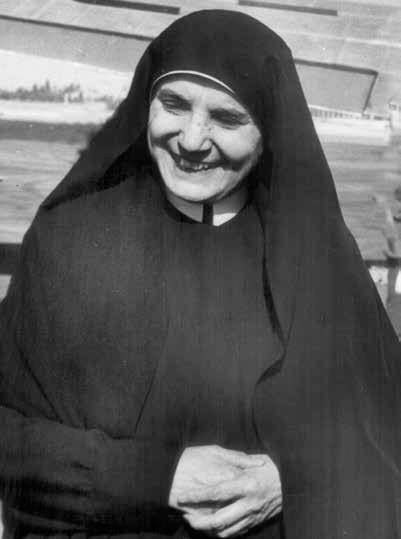 I am not able to express as fully as I would like our surprise and unexpected joy when the doctors told us with perplexity that “the cancer in the abdominal region has disappeared and we can’t explain why.” This news came at one of the darkest and most difficult hours of my illness. At that moment my wife and I understood that what had happened to us could only be called a genuine journey of spiritual growth. With the help of Sr. Thecla, we experienced the mercy of God in that time of testing and suffering.

Let us join this family in thanking the Father for his mercy and continue to pray to Maestra Thecla for all the needs of the Church and world.