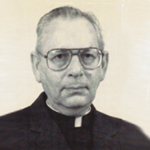 When I was asked to speak about Sr. Thecla Merlo, Co-Foundress and first Superior General of the Daughters of St. Paul, I was reminded of the words the Apostle Paul wrote at the beginning of the third chapter of his letter to the Colossians: “Think of what is above, not of what is on earth. For you have died, and your life is hidden with Christ in God.” Perhaps some people would be amazed at my placement of a strong-willed and ardent woman alongside the thought of death and hiddenness. As the Gospel says, one does not light a lamp and then place it under a bushel basket. But besides being a strong-willed, energetic and ardent woman, Sr. Thecla Merlo was also very wise. Precisely because of this, she knew how to “die in Christ” so as to live with him and thus become a messenger of life. The secret of her charismatic efficacy was her hiddenness in Christ. […]

She did not always find fidelity to the Founder and dedication to the Congregation with its many worries and fatiguing responsibilities simple and compatible in day-to-day practice. Her responsibilities energized her but she also felt the exhaustion of self-immolation. Religious life was a crucifixion. “The vows,” she said, “are the three nails that bind a soul to the service of God.” And she threw herself into this service without hesitation, accepting in advance all the consequences of her decision.

The words of Paul that I just cited find an echo in chapter 12 of the Gospel of John: “Unless a grain of wheat falls to the ground and dies, it remains just a single grain; but if it dies, it bears much fruit. Those who love their life lose it, and those who hate their life in this world will keep it for eternal life.” 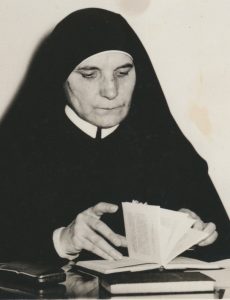 This is the sublime mysticism of Christ. Annihilation in him yields abundant fruit, and that fruit is apostolic work. Immolating oneself on this earth enables a person to rediscover life; it makes a person a bearer of life. But it is a work of grace. Sr. Thecla opened her entire being to the grace of God. She died to self so that Christ might live. And the grace she received in return gave her life such depth and power that it seems like she is still alive today.

We need to consider Sr. Thecla under a psychological-spiritual profile, that is, as the object of the work of God’s grace. She practiced self-denial and balance, and one of the effects of the work of grace in her was precisely to give her spiritual equilibrium. Persuaded that the source of true success in the apostolate was life in Christ, there was no activity in her that distracted her from contemplation, just as there was no prayer in which she did not unite to Christ all the problems of the Congregation and the Church. […]

Hers was a truly apostolic life: she was active in contemplation and contemplative in action. Not bigotry or workaholism, but apostolic activity in Christ and for Christ–a flood of charitable works that flowed from her life of faith. Speaking about the apostolate, she said: “The Lord wants to associate us to his own mission of saving the world.”

Aware of the grandeur of the [Pauline] vocation, she lived it by dying to self and living in Christ. She wanted her daughters to do this too so as to be worthy of such a lofty gift of God. Therefore she felt there should not be any ambiguity about the meaning of the [Pauline] vocation. Every thought that could soil its beauty–that is, assimilation in Christ–was to be banished.

In one of her conferences, she said: “Tell those who want to become sisters that there are many sacrifices to be made: if they come because they like the habit or because [the religious life] is comfortable, then they are not good vocations. Above all, we must practice self-detachment–this is the greatest sacrifice. May the Lord give us this grace.”

[…] A woman of faith, her apostolic activity was extraordinary. Because her gaze was fixed on Christ, she saw in him the needs of people. But she was also a woman of marvelous and sublime hope. 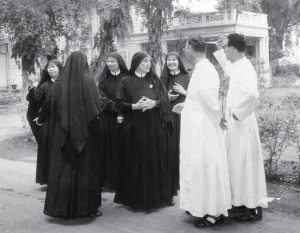 The last time I saw and spoke with Sister Thecla was during her final visit to the Far East. I remember that evening clearly: night had already fallen when I met her in Rizal Memorial Park in Manila. The park was crowded with people waiting for the Corpus Christi procession to arrive from the Cathedral. Sr. Thecla was standing on the sidewalk, the beads of her rosary slipping through her fingers in ceaseless prayer. She smiled when she saw me and we greeted each other. As we talked, what struck me was that the things she spoke about all had to do with spiritual matters, which she discussed without any airs or spiritualistic affectation. She continually referred to God, very simply and I would almost say ingenuously. She was like a little child, in the biblical sense of the word.

I also remember an occasion on which, many years prior to this, I stopped by the FSP residence in Rome and found Sr. Thecla in the courtyard with some other sisters. They were all sewing and embroidering. I paused to exchange a few words with them and one of the group asked me why I did not talk about heaven in my classes (I was teaching a course on St. Paul at the time).

I replied a little loftily that we didn’t know anything about heaven. Even St. Paul, the only one who said he had been there, could only say that he had seen things that eye had not seen and ear had not heard. I was trying to be humorous, but Prima Maestra responded with great enthusiasm: “How consoling it is to hear St. Paul say things like that! How beautiful heaven must be if even he couldn’t describe it!”

Heaven was Sr. Thecla’s goal. She kept her thoughts fixed on it and this gave her the energy she needed on her hard journey through life.

I would like to close with something she said that I find very significant: “Let us always look on high, to heaven! That is our true homeland. The Lord has prepared a place for us there. We must aspire to reach heaven at any cost. Let us never get discouraged! Let us distrust ourselves and trust God!” (VPC 51)

This text is taken from the testimony of Silvano Gratilli, ssp, delivered at the Congress: “I Carry You in My Heart”: Twenty-Five Years after the Death of the Servant of God Maestra Thecla Merlo, Rocca di Papa (Rome), 2-5 February 1989.
Silvano Gratilli, ssp(1915-1993)