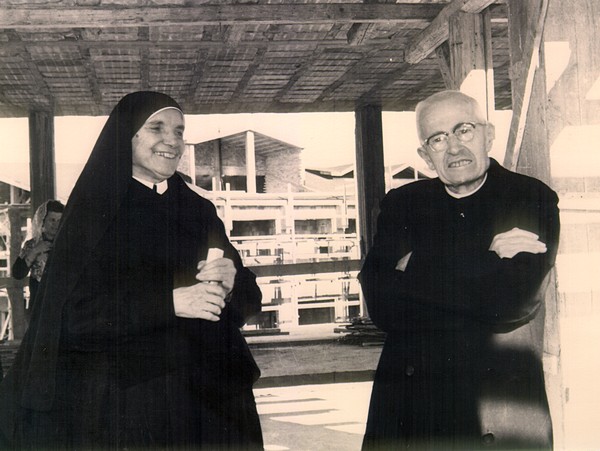 Here are some of Fr. Alberione’s statements, overflowing with affection and gratitude, concerning the role of Maestra Thecla in the history of the Congregation of the Daughters of St. Paul.

If obedience is being lived in the Congregation, much of the merit goes to Prima Maestra Thecla, who was always obedient. When someone who holds a particular office obeys, it is easier for those under her to obey. (23 September 1963)

A program of Life

Today is the Feast of St. Thecla. Today the Church invites us to rejoice. St. Thecla is considered to be the first female Christian martyr.
This feast invites us to rejoice because the name of this saint is a program of life. The same is true of Prima Maestra. If all [the FSPs] possessed the prayer and humility of Prima Maestra, they would always enjoy great interior and exterior peace even in the midst of troubles, which are certainly never lacking in life and which increase the more we try to be good. They grow in proportion to our age, in proportion to the sufferings we merit, and in proportion to those that we merit because the Lord sends them to the ones who are able to bear them so as to increase in holiness.
Prima Maestra’s piety is known to everyone, not only because of how much she prays and her fidelity to the practices of piety, but above all because of the quality of her prayer life. (23 September 1960)

We should make the novena for the Feast of St. Thecla with our whole being: upright, humble thoughts; upright, humble sentiments; upright, humble apostolate; upright, humble mutual relations. Humility will always be the vital source of grace for you and for the Institute.
In this, Prima Maestra gives you an example that can serve all of you, without exception, as a mirror. She has done this from the beginning of the Congregation. Her attitude has always been simple, humble and recollected.
One day, Canon Chiesa saw her pass by. “She is a chosen soul,” he said, and at that time he didn’t know her as he did later.
Maria Mazzarello, although uneducated, guided her Institute very competently and she is now canonized. Wisdom does not depend on the amount of our formal studies but on the grace of the Holy Spirit. You owe everything to Prima Maestra, and I too am deeply indebted to her because she enlightened me and provided me with orientation in both happy and sad circumstances; she comforted me when difficulties blocked the way.
Be religious and Paulines, first of all. Prima Maestra is enlightened by God. She has such great insight when it comes to choosing people for various offices that at times even I am amazed. […]
I would like all of you to be like Prima Maestra: nothing without her; everything with her. I am not a big fan of noisy parties, letters, special songs, etc. [to celebrate feast days]. I prefer the practice of the virtues and the imitation of the person being honored. Follow Prima Maestra humbly and docilely; lovingly carry out her directives; do not oppose her will; help her through your prayers; act in such a way that she won’t have to bear the weight of her responsibilities with suffering.

Thanking the Daughters of St. Paul for their best wishes for his 50th anniversary of ordination to the priesthood (1957), he said:

I am praying for everyone. I know that [the FSPs] everywhere are following Prima Maestra and this is everything. In fact, it is your way to holiness and the apostolate. And then? We will all be together in heaven. I give you all my blessing (CVV 238).

After the death of Maestra Thecla, Fr. Alberione preached repeatedly about her holiness and her role in the Congregation and in the Pauline Family. Here is one brief extract:

Embrace the holy heritage she left you. Remember that you will have other Prima Maestras but only one Mother because she is the person who gave you the spiritual life and vocation as she discovered it and was guided and sanctified in it…. Who shaped everything? Prima Maestra and therefore she is both your Mother and Maestra (Teacher). The legacy she left you is a precious heritage. If a child receives a large inheritance from his/her father and increases it, so much the better. Therefore, increase the inheritance you have received and never stop [doing this] because the whole Institute is still in need of great development. (29 March 1964)

On the occasion of the Chapter held immediately after Prima Maestra’s death to elect a new Superior General, Fr. Alberione said:

The government must continue, applying itself always more to particularities, because Prima Maestra had special faculties, besides having a much broader view of everything. Now we have reached the point of normal government. Hers was an extraordinarily-enlightened mode of governing because she was a special light for the Institute, but now distinctions must be made…and each member of the government must do her part. […] Ensure that the Institute moves ahead in step with the government as Prima Maestra guided it by means of her activities. But remember that the person who succeeds her does not have the graces she had, because she was also your Mother. Those who come after her are not.[1] (April 1964)

Mother of the Daughters of St. Paul and of the Whole Pauline Family

She [Maestra Thecla] has left us many example, including this one: with a big heart, she always generously helped the Institutes of the Pious Disciples, the Pastorelle Sisters and the Apostolines. With her own hands she prepared their habits down to the smallest details, making and remaking them until she considered them to be suitable. She also helped the Annunciationists. This witnesses to her great heart, to her genuine charity. There was truly no selfishness or envy in her. Far from it! She rejoiced in every good outcome that she noted in the different Congregations of the Pauline Family.[2](Ariccia, 5 April 1964)