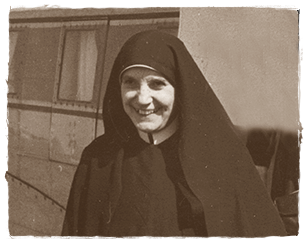 From the Testimony of Fr. Carlo DraGone1

I always admired and esteemed Maestra The- cla from the time I first met her, shortly after I entered the Society of St. Paul in 1925. I saw her as a prudent, capable and virtuous person and my esteem for her grew at our every en- counter. I had the chance to meet and speak with her more frequently after she was admit- ted to Queen of Apostles Clinic as a patient on 16 June 1963.2

After the first attack of her illness, she rallied and was able to express herself fairly easily, even though she stumbled over a word here and there. She would give me a summary of her day and speak about spiritual matters. Each of our meetings ended with her request that I hear her confession. These meetings con- firmed my conviction that Maestra Thecla was a person who truly belonged to God: the wise, strong and upright woman praised by Sacred Scripture; a woman rich in both natural and su- pernatural gifts, with everything hidden under the veil of simplicity and humility.

During her illness, Maestra Thecla revealed her faith in all its simplicity and greatness. She often said to me: “How good the Lord Jesus was to give me a sign of my imminent death and allow me to recover enough to prepare myself for the final judgment and heaven. Please help me to use this time well. I want to do all my purga- tory here on earth…. I want to use this illness to purify myself and obtain many graces for my sisters, Primo Maestro, the Pauline Family, the Church and Vatican Council II.”

She renewed these intentions often, saying: “I can’t remember things anymore. My mind is not what it used to be. Please help me by suggesting the intentions I should pray for today.”

If Maestra Thecla had not had great faith, she would not have followed her vocation. It really called for heroic faith to leave her family so as to embrace an uncertain future and the delicate, difficult responsibilities entrusted to her by the Founder, often without explanation. It  called for heroic faith for her to place herself at the dis- position of this priest who to a certain degree shocked everyone because of his daring. His critics considered him a dreamer, a megaloma- niac, clearly destined to fail in his undertakings, which many considered very risky.

Those who lived alongside Fr. Alberione in the first years of his foundations remember how hard it was to follow him always and every- where. The will of God was not written on his forehead, and thus clearly visible to all. He of- ten gave dispositions and asked for sacrifices for which he did not (and could not) provide reasons. He led everyone along a new and dif- ficult path that only people of faith were able to  perceive. Following him called for  a  he- roic faith that not everyone possessed. Many “abandoned ship” out of prudence, unwilling to risk sinking along with the small and fragile boat of their Institute.

But Maestra Thecla had neither doubts nor un- certainties. She saw the Founder as a person raised up by God to carry out a new and spe- cial mission. Only her heroic faith can explain why she followed him, collaborated with him, defended him and helped him in thousands of ways for almost fifty years. When she was a pa- tient in Queen of Apostles Clinic, Albano, she often spoke to me about Primo Maestro and her words revealed her immense esteem, uncondi- tional devotion and strong but tender affection for him. She never hesitated to undertake enor- mous expenses and also to bear criticism if it meant furthering his desires and projects.

Prima Maestra Thecla was universally ad- mired for the wise and prudent way in which she governed. Her governing style was based on a rare balance of masculine strength and feminine kindness. Her kindness won her the affection of others, while her strength obtained their obedient, responsible, joyful and gener- ous collaboration.

It was not hard to see that Maestra Thecla lived and worked in the light and power of the Holy Spirit. Even though she did not possess an ex- ceptional education, humanly speaking, she possessed beyond the shadow of doubt great wisdom when it came to governing. She was both strong and sweet, exacting and compas- sionate, balanced and enlightened. Everyone remembers with gratitude and admiration her wise and enlightened advice, directives, deci- sions and commands.

She possessed to an eminent degree the wis- dom of the spiritual life, of the Pauline religious life, of the saints and of God. The Holy Spirit poured out on her the light of faith, apostolic wisdom and a practical fortitude, enabling her to govern in a strong, maternal, effective and exemplary way.

Teacher of Detachment and Humility

During Maestra Thecla’s hospitalization and invalidity, I admired her as a true teacher of how to detach oneself from everything. Her malady struck her at a time when she was working at full capacity as Superior General of an Institute with thousands of members and hundreds of communities scattered through- out the world. She still had an infinite number of things to initiate and conclude, continue and modify. But she never gave the slightest hint that she was worried or unhappy about leav- ing the government of the Institute to others. She never expressed the desire to be given enough time and health to meet the Institute’s most pressing and urgent needs. Instead, her favorite phrases were: “May the will of God be done,” “Deo gratias” and “Patience.”

I admired her total detachment from her of- fice when she asked my advice on the matter, saying: “I want to resign…. It would be better for another person to take my place so as to do what is necessary for the good of the Con- gregation.” I advised her to inform the proper authorities (Primo Maestro, first of all) of her intention and then to wait for their responses. And that is what she did. She was told to re- main in office and to let her Vicar do whatever she herself was unable to do. She accepted this disposition without objections and with great simplicity and never raised the issue again.

Once  she  confided  to  me  something  that amazed me and that showed me how intimate and profound her union with God was, and how docile she was to the Holy Spirit, who guided her contemplation. “When I make my visit to the Blessed Sacrament,” she told me, “or when I receive holy communion, I adore Jesus Master, the Son of God Incarnate, in the holy Host. And in him I adore the Father and the Holy Spirit. In him, I see the whole Mystical Body. Am I mistaken in this?” When I assured her that she was not, she continued to respond to the movements of the Holy Spirit, at work within her “almost by divine instinct,” following his profound inspirations and simplifying her interior life, which was firmly centered on Eucharistic, Trinitarian and Marian contemplation.

More than once she tearfully confided to me: “I’m not able to pray anymore.” One evening, she said: “I can’t say long prayers anymore. I can’t go–and I’m not allowed to go–to chapel anymore to pray, to make the Visit and my meditation. I sit on my balcony and look at the sky, at all the things God made, and I think of him. In this way, I feel united to him.”

She was extremely faithful about overlooking the shortcomings of the sisters. I never heard her once mention, even indirectly, anything another person had done to cause her suffering or bitter- ness. She not only forgave others; it seemed as if she totally forgot what they had done.

One evening, shortly after the first attack of her illness, I saw that she had on her desk a stack of letters from all over the world. She said to me: “Look how good my daughters are: how many prayers, how many sacrifices they are offering for me to obtain my healing. This malady has been even better than a course of spiritual exer- cises for me and also for them. I am not worthy of their love–they love me because they are good.”

1  Carlo Tommaso Dragone (1911-1974) was noted for his ex-ceptionally vast and profound thought. His Spiritual Diary is a treasure of mystical experiences lived in daily Pauline life.

2 Fr. Dragone was the chaplain of Queen of Apostles Clinic at that time.