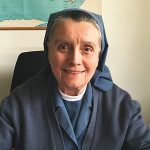 I think one of the greatest gifts I received from the Lord was the fact that the house in which I was born and raised was very close to the main houses of the Daughters of St. Paul and the Society of St. Paul in Rome. This had a deep impact on my life. In fact, in the 1930’s, at the same time when Fr. Alberione was having the first Pauline houses built in Rome, my father was building a house for our big family: I had 8 brothers and sisters, including 4 who became religious (in fact, two of them were among the first Pastorelle Sisters). Our property bordered that of the Paulines–the wall that now separates the two properties did not exist then.

My father was a good friend and collaborator of Fr. Alberione and Fr. Timothy Giaccardo so they came to our house often. Even after my father died in 1939 (a year after my birth), Fr. Alberione continued to visit our family to bring communion and hear the confession of one of my sisters, who was bedridden for 3 years. 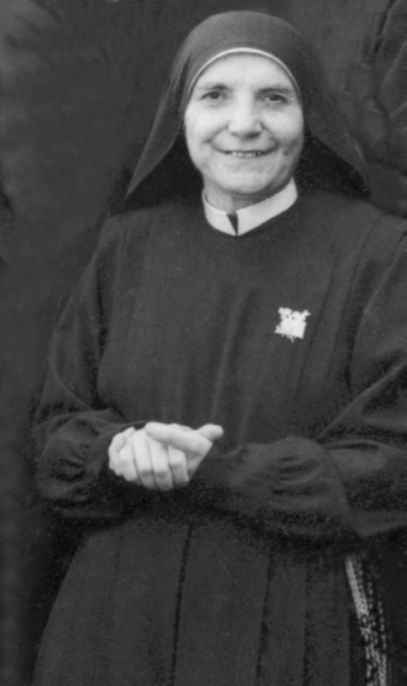 In those years, Maestra Thecla Merlo would also come to see my family from time to time. My memories of her are beautiful and filled with gratitude, and those feelings were shared by my whole family. I remember her as a straightforward, decisive and capable person–a woman who displayed great humanity toward my mother, a widow with 8 young children, and toward us. Indeed, right after the death of my father, Maestra Thecla invited one of my brothers and one of my sisters, who were 5 and 7 years old at the time, to spend about 10 days with her at the convent.

Later, as I grew older and wondered what was wrong with two of my older sisters for having made the “strange choice” to enter the convent, I discovered that Maestra Thecla was a woman who had truly found fulfillment in the consecrated life.

My brothers and sisters and I took an active part in the Catholic Action Movement: my oldest siblings in the parish of St. Paul’s Basilica, and we younger ones in the Collina Volpi Chapel, even though we belonged to Good Shepherd Parish. A Daughter of St. Paul guided our CA group and at times she would take us to the convent for recitations, prayer or a visit to the typography. On those occasions, I would see Prima Maestra from time to time. My childhood and teenage years were very serene and beautiful. The Daughters of St. Paul helped us abundantly and competently–just like sisters. I remember in particular Sr. Carmelina, Sr. Giuseppina, Sr. Eulalia (who later left for Korea), Maestra Assunta, who guided some of our meetings, and also several other sisters.

It is my belief that Prima Maestra Thecla provided the Daughters of St. Paul and indeed the whole Pauline Family with the encouragement needed to move ahead.

My mother said that when the first of my sisters to become a Pastorelle made her religious profession in 1940 at Genzano (near Albano), Prima Maestra and another Daughter of St. Paul went to pick her up and accompany her there. It was also Prima Maestra who suggested to Primo Maestro that he give my sister the name of my father (Agostino), who had recently died, and that is what happened.

When another of my sisters got married, Prima Maestra gave her a beautiful hand-croched table cloth. All these “small” but at the same time “big” things revealed her great heart, which rejoiced at giving to others.

My encounters with Maestra Thecla continued even after I joined the Apostoline Sisters. Besides seeing her at the various celebrations of the Pauline Family, I remember one day in 1957 at Castel Gandolfo. I had not yet entered the Congregation and we were all outside in the courtyard when she arrived. Without getting out of the car, she handed me a small tape recorder. “This is so that you can record Primo Maestro’s meditations,” she told me. It was indeed a very useful gift! In 1958, when it was decided that we would wear the religious habit, we prepared a model and she came with Primo Maestro to examine it and give us her opinion about it.

When the Daughters of St. Paul held a vocation exhibit in Alba in 1961, they prepared a number of panels on that theme. Primo Maestro wanted them to give us the panels when they were done with them because we were just beginning the vocation apostolate. Some of the FSPs objected, telling Prima Maestra that a lot of expense and hard work had gone into creating them. She replied very serenely: “Not only are the panels to be given to the Apostolines, but you yourselves will deliver them to the sisters’ house in Castel Gandolfo!” When I was told about this, I have to admit that I rejoiced more in Prima Maestra’s big-heartedness than in the panels themselves, even though I deeply appreciated them because I had been placed in charge of our vocation exhibits! Prima Maestra’s open and generous way of behaving has always remained a characteristic of the Daughters of St. Paul. 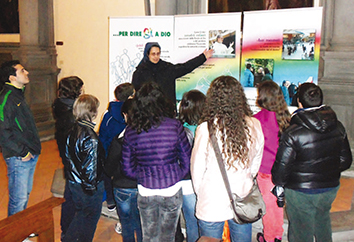 I saw her for the last time when she was at the Queen of Apostles Clinic, Albano, drawing to the end of her life. Even though she was suffering intensely, she welcomed us with a sweet and radiant smile. I couldn’t help but think of what she had said on another occasion: “We close our eyes here [on earth], only to open them in heaven and see God. How beautiful!”

In October 1985, I had the very welcome opportunity to make my small testimony on her behalf before the diocesan Curia in Alba.

I thank the Lord profoundly for having met Maestra Thecla and I sincerely hope to see her again!