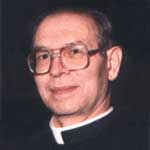 Many terms have been used to describe the action of Prima Maestra Thecla alongside Blessed James Alberione in building the Pauline Family. In my opinion, the most expressive of these is the phrase, woman associated to priestly zeal, the title of a fundamental book written by the Founder.

In fact, when Fr. Alberione decided to begin a branch of women religious to complement the male foundation he had initiated, he was already firmly convinced that the collaboration of woman was essential in every human activity, precisely because woman is endowed with intuition, wisdom, sensitivity, sweetness, and is therefore able to complete masculine resourcefulness with the necessary balance, in keeping with the perspective of God the Creator who, after giving life to man, placed beside him a help similar to him by creating woman.

The providential meeting between Fr. Alberione and young Teresa Merlo quickly revealed her moral depth, balance and wisdom.  He saw that she embodied the feminine ideal that would enrich the religious Family he was starting. Thus the Daughters of St. Paul came into being–a group that, while autonomous, would carry out the same apostolate as his masculine foundation.

The spirit of mutual collaboration in this Family would allow it to express the best of itself through effective insertion in the life of the Church in Italy and abroad. It would develop into what Pope Paul VI called “the admirable Pauline Family” and would produce splendid fruits. In the meantime, Teresa Merlo, who at her profession took the name “Thecla,” was considered by everyone to be the mother of the foundation, not only because of her valuable and intelligent collaboration in the social communications apostolate but also because of her kind and maternal influence on the whole Family.

Many Pauline priests habitually turned to her in difficult moments. Thanks to her enlightening words, quite a few of them found the strength to overcome their problems and remain faithful to their vocation. This happened most often in cases in which members of the SSP received the order to go abroad. No one has ever been able to fathom why Primo Maestro, after having asked a priest to accept a mission overseas in virtue of obedience, would then proceed to confront him with all his unsatisfactory behavior. It is not surprising that the unfortunate person would leave the Founder’s office bitter, agitated or irritated, and, needing to vent his feelings, would immediately head for the office of Prima Maestra so as to unburden himself to her. It was precisely in these cases that Maestra Thecla, always very understanding and maternal, found the right words to offer comfort and encouragement to the distraught religious, to the point that it was not long before he was restored to peace of heart. Not to mention that, in the meantime, she would also take steps to supply the departing missionary with the essentials he needed for his new assignment, often going so far as to buy the ticket for his trip!

We can say that Maestra Thecla exercised a role of continual mediation [in the Pauline Family]. At the “I Carry You in My Heart” Encounter held in 1989 to commemorate the 25th anniversary of her death, Fr. Renato Perino, at that time Superior General of the Society of St. Paul, said: “I believe Maestra Thecla’s great mission and the important lesson she taught us was this continual mediation, carried out in a spirit of complete fidelity to Fr. Alberione. It was a service that at times called for heroic obedience–an obedience she always concretized in a dynamic and resourceful way….”