If obedience is being lived in the Congregation, much of the merit goes to Prima Maestra Thecla, who was always obedient.  Continue >> 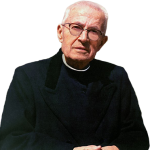 Founder of the Pauline Family

To do good: this was Maestra Thecla’s great dream. It was the source of her enterprising spirit and it gave her the courage to embrace every instrument of social communication: films, catechetical filmstrips, records, magazines….Continue >> 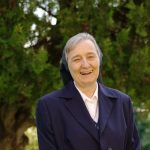 Sr. Tecla Merlo, the first Superior General of the Daughters of St. Paul, was born on 20 February 1894 in Castagnito (Alba), Italy.

She was one of the first young women to follow Fr. James Alberione when he launched the first feminine branch of the Pauline Family in 1915 and thus she participated in the very humble beginnings of the Institute. A very docile daughter of the Founder, she was his wise and intelligent collaborator in concretizing the divine project that had been entrusted to him, ever-ready to fearlessly take on the instruments of modern communication and to risk undertaking new initiatives. Like a good mother, she also contributed to the beginnings of the other Institutes of the Pauline Family.

Sr. Thecla concentrated her teachings on a single goal: the call to holiness, which she viewed as the essential condition for effective evangelization with the instruments of social communication.

When she died in 1964, the Founder said: “It was the Lord who sustained her. She was a contemplative person. She had recourse to people, but she had recourse first and foremost to God. For her, everything came from God and had to be directed to God.”

Sr. Thecla’s message, which still remains to be discovered in all its fullness, is a prophetic light for the new evangelization. Her experience of life–“the way of holiness and apostolate”–can serve as an ever-more radiant light for apostles today.