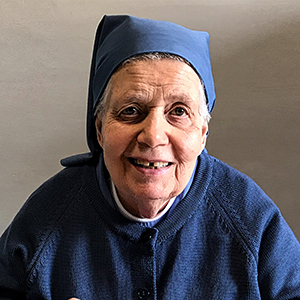 When I was about 15 years old, I began to think about consecrating myself to the Lord and so I started attending daily Mass in the Queen of Apostles Sanctuary. Leaving the church after Mass, every so often I would cross paths with Prima Maestra Thecla, whom I always greeted with a respectful “Sia lodato Gesù Cristo,” and with a smile she would reply, “Sempre sia lodato.” The warmth radiating from her kind brown eyes made me feel good and the memory of it has remained in my heart all my life.

A few years later, when I met Fr. Alberione, he pointed me in the direction of the Apostoline Sisters–a Pauline Congregation that was just beginning to take shape–even though I had confided to him that I had been thinking about joining the Daughters of St. Paul. At first I was a little puzzled by his advice, which

I discussed with Sr. Mercedes Migliardi, fsp, who was providing me with accompaniment on my vocational journey. She said she would talk about it with Prima Maestra, who knew I had an inclination toward the Daughters of St. Paul. Maestra Thecla replied: “Tell Juliana (my baptismal name) that I am very happy to hear what Primo Maestro told her.”

When I entered the Institute of the Sisters of Mary, Queen of Apostles two years later, she sent me a big package of sheets and towels to supplement my entrance kit. In addition to being a woman of God, she was also a very practical person! In those years (1955-1958), my family was going through serious economic problems. When Prima Maestra Thecla heard about this, she was very supportive of us, both through the Daughters of St. Paul who knew us (especially Sr. Mercedes Migliardi, Sr. Giuseppina Jezzoni and Sr. Clementina Laudanno), and also through tangible gestures such as sending my family bolts of fabric to make clothes. I remember in particular some lovely fabric suitable for blouses. Once the garments were sewn, I wore them with great pleasure because they were so pretty, and even more because they were “Prima Maestra Thecla’s blouses.”

Even after I had entered the Apostoline Sisters, I continued to feel the vigilant and discreet presence of Prima Maestra not only toward me individually but also toward all the Apostolines, some of whom she had known for a long time. I remember one sunny afternoon in the summer in 1957, she stopped by briefly to give us a tape recorder so that we could tape the meditations and classes Fr. Alberione was guiding for us. That tape recorder, which we have preserved, is still functioning and has been very helpful to us in the work of transcribing Primo Maestro’s meditations, which we are in the process of publishing.

When our Institute was preparing to celebrate its first religious vestition and our habits were ready, Primo Maestro suggested that Maestra Thecla stop by our little house in Castel Gandolfo to examine the model, worn by an Apostoline Sister, and give us her authoritative opinion about it.

And in 1961, when we were putting together our first Vocation Exhibit at the urging of Fr. Alberione (the event was held in Alba in September of that year), Prima Maestra did not spare personnel or instruments to assist us with this new experience.

One last memory: When Prima Maestra Thecla became seriously ill, she was hospitalized at Queen of Apostles Hospital, Albano. Toward the end, when her meeting with the Lord seemed imminent, I had the grace to see her. Fr. Alberione was praying at her bedside and her eyes were half-closed, as if she were waiting to open them to the light of God forever. For me, it was as if she had indeed opened her eyes and looked at me with the same warm gaze she had turned on me all those years ago in the Queen of Apostles Sanctuary…. I pray to her continually, and her strong, loving presence accompanies me every day.

In conclusion, I want to say a big thank you first of all to the Lord, who gave Prima Maestra to you, the Daughters of St. Paul, and also to the whole Pauline Family. And then I want to thank you, my dear “big sisters,” who have always been so supportive of the Apostolines, not only with your hearts but also in many concrete ways.

You have learned very well the lessons of life taught by your (and our) Prima Maestra!