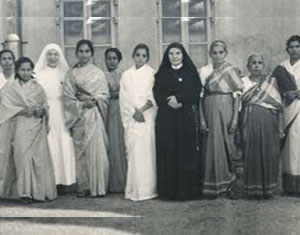 I had already been in the Alba community for some time so I surely must have seen Prima Maestra and listened to her. But I hadn’t “met” her in the full sense of the word. I was one of the “Immacolatine,” the youngest members of the community. I spent my days attending classes scheduled to be compatible with our apostolic duties, and studying under the supervision of our mistress and assistant-mistress, who guided us and looked after our needs with maternal love and care. I have no special memories of Prima Maestra during that period of my life. 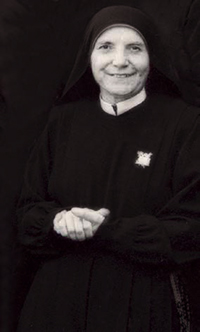 My first real contact with her took place in 1935. One day, late in the afternoon, while I was praying the rosary with my companions, our mistress, Maestra Natalina Spada, entered the chapel and signaled me to come out. When I joined her in the foyer, she told me that Prima Maestra wanted to see me. “Why?” I asked in surprise. “Just go. She’ll tell you why,” M. Natalina replied, and without further ado she opened the door to Prima Maestra’s office, which faced the chapel. Even though today I am almost blind, I can still clearly picture Prima Maestra as she was then–a lovely, welcoming person, with unforgettable eyes….

“You are Olga Guidetti, aren’t you?” she asked and then went right to the point. That was one of Prima Maestra’s most notable characteristics: she was always quick to get down to essentials. “I see you have asked to make your vestition,” she told me. “Yes,” I replied. “I will be 15 in June and I would like to take that step.”

“Your parents are against it,” she said.

“They think you are too young.”

I was bewildered. “That’s not like my parents and family,” I finally replied. “They are good, hardworking Christians, but they don’t know much about nuns or about the religious life. I don’t think that’s them [talking]. Maybe it’s my uncle. He’s a priest–Fr. Guido Guidetti, the pastor of Levizzano.”

Prima Maestra then asked me a series of questions–what today might be called “vocation testing,” because the questions concerned my health, prayer life, apostolate, companions…. “If it turns out you have to wait awhile to make your vestition,” she said, “the waiting period before you enter the novitiate could be shortened.” At that time there were a lot of girls who had made their vestition and who were waiting to begin the novitiate.

“No, no!” I exclaimed with youthful passion.

“I want to make my vestition in June!”

“In the meantime, continue to pray and to do your best.” The upshot was that I made my vestition on 30 June 1935.

I had truly “met” Prima Maestra, who turned out to be a good, attentive, concerned and affectionate mother. She was interested in me, in my parents, in my work–in everything that was dearest to me. That meeting with her went straight to my heart and has remained there ever since.

Other meetings with her followed, which is only normal in a life as long as mine [as of this writing, Sr. Lorenzina is 95 years old]. I will recount a few of those episodes here, extracted from a huge, colorful and fragrant “bouquet” of memories. They are not memories about “big” things–the kind of stories that can be found in biographies about Prima Maestra and that serve to illustrate her stature and uniqueness. Instead, they are “humble little blossoms” that make her my Prima Maestra.

In my day, the FSP novitiate in Rome was located on the third floor of the Divine Providence building in the Via Antonino Pio complex. Prima Maestra Thecla’s office was on the first floor. At the time of this incident, the novice Mistress, Maestra Nazarena Morando, was overseas, visiting the FSP communities in America and I, as assistant novice mistress, was standing in for her.

It was a beautiful spring morning. The novices, a group of more than fifty, were quiet, well-behaved and concentrating on their studies. The classroom was filled with light and fresh air. It was such a pretty picture that I wanted to share it with someone and an idea popped into my head. I ran down the stairs, burst into the Superior General’s office and exclaimed, “Prima Maestra, come with me! It’ll just take a minute! Come!” She asked me why. I explained in just a few words. Prima Maestra looked thoughtful and remained silent for longer than I expected. Her behavior served to remind me of the basics of my Pauline formation: discipline, order and regularity are all necessary but they aren’t the primary goals of formation, which should lead young women to give themselves entirely to Jesus, to love the Gospel and to take it to everyone.

In the end, Prima Maestra did not go up to the novitiate and I went back up the stairs with more food for thought than I had reckoned on.

On another occasion, after early morning Mass in the Queen of Apostles Sanctuary, I stopped to speak with my sister, who had come to visit me. While we stood chatting by the flight of steps leading up to the main entrance, Prima Maestra Thecla came out of the Sanctuary. She did not see us and my sister did not recognize her but as Prima Maestra, absorbed in recollection, walked down the avenue toward the front gate, I followed her with my gaze. After a minute, I whispered to my sister, “Do you know who that nun is?” “It’s your Prima Maestra!” my sister said in surprise and then called out,

“Prima Maestra! Prima Maestra!” By that time Prima Maestra Thecla was more than halfway to the gate but at the sound of my sister’s cry she turned around and came back. She then spent more than 15 minutes talking to my sister while I fidgeted uncomfortably at the thought of how many other things she probably had to do.

Prima Maestra was always extremely faithful to making her yearly course of spiritual exercises but in 1953 poor health prevented her from doing this. In fact, she was in the hospital. She was unhappy that she was not able to participate in any of the programmed retreats and, upon seeing this, her Vicar, Maestra Ignazia Balla, suggested that she make the spiritual exercises on her own in the nearby FSP community of Grottaferrata.

Maestra Ignazia asked me to go with Prima Maestra to Grottaferrata to be on hand in case she needed help with anything. She said that at the same time I could also make my own annual retreat. Concretely, my job was to pray alongside Prima Maestra and read aloud to her the texts suggested in the Spiritual Exercises of St. Ignatius of Loyola. Toward the end of our retreat, Prima Maestra said, “Tomorrow Primo Maestro is coming to hear our confessions.” The news took me by surprise and I remained silent. After a few moments I replied, “I’d rather not go to confession to Primo Maestro. But don’t worry, Prima Maestra. While you are talking to him, I will go to the Trappists and go to confession to the old chaplain there.”

The following day, I handed Prima Maestra the notebook containing my resolutions. I asked her to read them over to see if they were appropriate and then give me her advice. When she returned the notebook to me, she said, “I too made some resolutions and I had Primo Maestro look them over.” She unfolded a slip of paper on which the words “Queen of Apostles Sanctuary!” (with an exclamation point) were written three times.

I had the good fortune to accompany Prima Maestra on two of her trips abroad: to England in 1960 and to India in 1962.

In our community in Bandra, India, I shared a first-floor room with Prima Maestra. The room faced the staircase. During the day, Prima Maestra spent her time talking to the sisters while I became familiar with the city and got to know the people by accompanying different sisters as they went about their duties. Prima Maestra was happy about this because she believed this would later serve me in the apostolate.

One day I went to the market and that evening, before going to bed, I said unhappily, “Prima Maestra, today someone stole my watch.” “Where? At the market?” “I think so. That’s the only place I visited today.”

“I’m so sorry,” she said, “especially because it occurred to me to suggest that you leave your watch at home.” The next day, when I returned from a visit to downtown Bombay (now Mumbai), Prima Maestra gave me a very warm welcome when I entered our room. “Your watch wasn’t stolen after all!” she exclaimed. “I found it!” “Where?” “Under the bed. It was way back in a corner.” “How did you manage to reach it?” “I lay down flat on the floor and stretched out my arm.” And to think she was already sick at the time….

She might have been the Superior General but she was first of all “my” Prima Maestra.

From 1954-1961, whenever Prima Maestra was at home, she would gather the perpetual professed sisters together for a conference after the second Mass on Sunday. The purpose of these encounters was to provide us with a little formation and she usually took her point of departure from the Sunday epistle, focusing in particular on the virtue of charity.

She would begin: “As St. Paul says…” or “St. Paul recommends…” making his letters her specific point of reference. Prima Maestra was not a biblical scholar but through her voice the words of Paul penetrated our hearts and laid bare all our vices contrary to love: impatience, jealousy, envy, hot temper, selfishness, pride, a lack of respect…. And with authority and maternal understanding she would sound the joyous notes of the Hymn to Love: “Love is patient and kind; it is not envious or boastful or arrogant or rude. It does not insist on its own way. It is not irritable or resentful; it does not rejoice in wrongdoing but rejoices in the truth. It bears all things, believes all things, hopes all things, endures all things” (1 Co. 13:4-7).

One Sunday, after one of these conferences (which were significant moments in the spiritual formation carried out by Prima Maestra), I paused on the first floor landing of the stairway in the Divine Providence building and stood looking out the window, absorbed in thought. But the stairway is narrow and soon someone else came down the steps, finding them blocked. It was Maestra Ignazia. When she saw me, she asked, “What are you doing here?” “I’m thinking about what Prima Maestra said. Her words struck me profoundly.” “Do you know why her words have that effect?” Maestra Ignazia asked. “Because she is always united to the Lord. She is in deep communion with him. Everybody sees this. Everybody comments on it.”