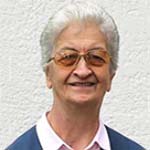 I entered the Congregation in 1955, when I was 20 years old. As an aspirant, I initially thought that Maestra Thecla was just one sister among many. But then one of my companions told me that she was the Co-Foundress of the Institute so I began to watch her more attentively but from afar because I was very shy and now considered her to be a person too important for me to approach.

The strongest impression she made on me was the attitude she radiated while at prayer in the Queen of Apostles Sanctuary, Rome. Her posture and air of recollection told me that she was totally focused on God and I remember thinking that the Founder had been very wise when he chose her to collaborate with him in founding our Congregation. Observing her at prayer, it seemed to me that she was truly a “soul of God.” She was kneeling but no part of her body touched the pew in front of her. I promptly took her as a role model, saying to myself: “If she, the one who guides us, behaves like this, then I want to be like her! But will I ever be as holy as she is?”

When Maestra Thecla gave us conferences on Sunday, she would share her thoughts with us with great conviction. Her talks were not long but they were very practical and always applied to our daily life. She spoke forcefully and clearly, insisting that we must be firmly rooted in our spirituality and not water it down with lines of thought that happened to be currently in fashion.

Maestra Thecla traveled a lot to visit our sisters in other countries. When she returned to Rome, she would tell us about the places she had visited, her impressions of the local people, and her experiences with the sisters. The things she said made us appreciate the beauty and challenges of our vocation and fired us with a great yearning to go to the missions. What is more, she shared her thoughts and gave us advice in a cheerful way: we all looked forward to those encounters because she always enlivened them with many stories and humorous anecdotes.

Another thing about Maestra Thecla that deeply impressed me was her spirit of service. More than once I saw her in the kitchen peeling potatoes, washing dishes and participating in clean-up duties right along with the other sisters. I was so curious to see how she acted in “ordinary life” that I would sometimes slip away from the other postulants right after the midday meal and run to the Generalate house [located in the same Via Antonino Pio compound] to see if I could catch a glimpse of her so as to see what she was doing and how she was doing it.

One of the few times I spoke personally to Maestra Thecla was when she asked me to help the Sister-sacristan in the Queen of Apostles Sanctuary. She said: “I like the way you approach the altar and perform various cleaning duties. It is clear to see that you understand the importance of the Liturgy.” It made me very happy to realize she had noticed me!

As first profession drew near, Maestra Thecla called the novices one by one and spoke with each of us personally. During my postulancy, I had been sent to Reggio Calabria for a period of apostolic experience. I enjoyed my time there because the sisters were very kind to me and let me know that they appreciated my help. However, Maestra Nazarena, our novice mistress, told me very clearly that I would not be returning to that community after my profession and that I had to detach my heart from it. So I was very surprised when, in speaking with Maestra Thecla in preparation for my profession, she said: “I am sending you back to Reggio Calabria because the sisters there asked for your help in the book center.”

Because my father was a railway employee, I was able to travel by train free of charge. In the Italian Province, sisters with this benefit were jokingly called “Daughters of the trains.” As a result, I spent a lot of time on trains during my initial formation, taking packages of books and other items to sisters in different cities. I would set out early in the morning and, along my route, deliver the appropriate packages to the sisters who had come to the station to meet the train. Then I would re-board and continue on to the next stop on my list. I remember in particular the trips I made when our magazine Così was launched: how many times I went to the Bari and Taranto train stations, leaving packages containing hundreds of magazines at each stop…. And how many trips I also made to Salerno and Naples with packages of our catechisms!

These trips involved a lot of running on my part: I had to catch the train, switch to other trains along the way, deliver the packages on time…. At the end of a long and exhausting day, I would head back home on the first train available, often arriving late at night. During my year of novitiate, I remember that I returned home from one of these trips more tired than usual. It was Christmas and that night I fainted during Midnight Mass, scaring my novice mistress and her assistant, who immediately took me to Albano. The doctor there said that I had somehow contracted typhoid fever and he hospitalized me. I was under medical care for 3 weeks and this made me very anxious because I wondered if I would be allowed to make my profession. But Maestra Thecla reassured me: “Your mistresses are worried about you because they say you are very thin and pale, but I can see that you are strong person. Go ahead with faith!”

Maestra Thecla’s example, style of life and teachings have always accompanied me throughout my life. Whenever I have gone through hard times, especially in the apostolate, the memory of her strength and profound convictions has always “recharged” me. For me, Maestra Thecla was truly a MAESTRA–a teacher of life!

Your mistresses are worried about you because they say you are very thin and pale, but I can see that you are strong person. Go ahead with faith!
Maria Grazia Nume, fspMissionaria della Repubblica Domenica