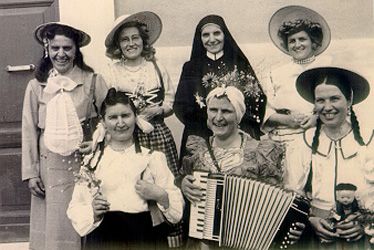 Maestra Thecla loved every sister very much. Each time we saw her, she was always very concerned about us. She would ask not only how things were going in our communities but she would also inquire about our health and about how we were doing personally. Her great desire was for us to love one another.

When another sister and I left Alba for China [in 1937], Maestra Thecla accompanied us to the [train] station [the first stage of the journey] and when it was time to say goodbye she hugged me with such deep affection that I am still moved when I recall that moment. That same day she sent me a letter by means of another Daughter of St. Paul who joined us in Naples. That letter too was brimming over with affection. In it she urged us with maternal solicitude to love one another, to always remain faithful to our superiors, to establish a community founded on love, and to become saints. 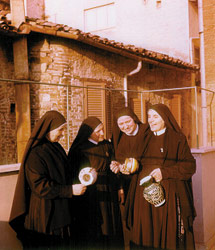 From 1937 until 1941 (the outbreak of World War II), she kept track of what was happening to us by means of the letters she sent us on a regular basis. [In those letters,] she always asked us about our health, reminded us to apply ourselves to the study of the local language and to gradually insert ourselves into the Chinese context (and later the Filipino context) so as to carry out the apostolate better.

Ten years went by before I returned to Italy. Maestra Thecla came to Naples to meet us–our first encounter after all that time. She asked us with great solicitude about our trip and about what had happened to us during the war. She wanted to know about the trials we had undergone and how we had managed to stay alive…. In the end, she said: “The Blessed Mother saved you all. Be grateful for this and strive to love her very much.”

I remember how punctual she was about answering all our letters. She wrote so clearly and succinctly that she could clarify any problem with just a few words. During the long years of the war–from 1941 to the first half of 1945–we received no news [from Italy]. Because it was not possible for her to communicate with us directly, Maestra Thecla would send the letters she wrote us to our sisters in the United States, who would then forward them to us. When communication between Italy and the countries of the Far East was restored, I can say that not a single letter I ever wrote to her went unanswered. And this was true up until her final illness. In fact, the last letter I received from her was dated 14 November 1963. Her health worsened on 22 November and after that she was no longer able to speak or write.

Maestra Thecla’s prudence and attention to detail were also revealed in the way she practiced the virtue of justice. She strongly insisted that every person be given his/her due, in particular with regard to payment for services done for us, even in situations where it would have been easy [for the worker] to avoid certain chores. As far as we could tell, Maestra Thecla herself was very scrupulous about carrying out her own responsibilities in an upright way. She strove first of all to be just with God, attributing to him all the good she was able to accomplish and accepting his will unreservedly, with a sincere: “Deo gratias.”

In the last stage of her life, it seemed to us that she was even more gentle and maternal, but she was also capable of being forceful, especially with herself. She had a great spirit of sacrifice, which she revealed above all by obeying the Rule and [participating in] community activities. Even when she was tired or up to her ears in work, she loved to spend time with her daughters. She would take part in community recreations so as to have the chance to see and speak with the sisters. And she did this both when she was in residence at the Generalate in Rome and when she was visiting our FSP communities abroad.

When she came to the Philippines, we didn’t have a car so we wanted to rent one for the duration of her stay. But Maestra Thecla rejected that proposal. She said: “If all of you can get around without a car, then so can I.” It was May, the hottest month of the year in the Philippines, but she made all her trips to the local communities without a car and without a word of complaint. She often advised us to learn how to adapt to the usages and customs of the local population.

I remember that on her last visit to Asia [January-May 1962], I accompanied her from India to the Philippines. Our first stop was Manila and when she arrived she did not feel well. At first, she decided to ask all the older sisters and the superiors of the branch houses to come to Manila, but then one day she said to me: “Listen, I’ve had an inspiration. Come make the hour of adoration with me and afterward I’ll tell you about it.” We went to the chapel, made the Visit, and as we left she said to me: “I’ve decided to go to the houses myself to see the sisters [instead of having them come to me]. Let them know. We’ll start tomorrow.”

We took a plane from one island to another. Maestra Thecla was always serene and cheerful, and she participated wholeheartedly in community recreations, which she considered to be just as important as her more serious duties. I noticed that when we reached the last branch houses she continued to see each sister personally, even though she was not feeling well at all, and she also continued to answer all the letters she received. But after the visits [to the houses] were over, she had to take to her bed because the pain in her legs was so severe.

What struck me most about Maestra Thecla was her humility and great faith. Once, when I was returning to India after several months in Rome, I found a note she had slipped into my handbag. It read: “Thank you for coming to Rome and for all that you did while you were here. Forgive me if I was brusque with you…but you know that I love you very much.”

When she left the Philippines, she left behind her a letter in which she thanked us for having “put up with her” during her visit and asked us to forgive her for not doing all that she had wanted to do and should have done.

When Fr. Alberione and Maestra Thecla visited Bombay in 1955, the house in which we were living at that time was very small. Fr. Alberione said immediately that we needed a bigger house. Maestra Thecla replied, “Yes, but we don’t have the money for it.” Primo Maestro retorted: “Where is your faith? Is it possible that you are still reasoning in such a human way?” She humbly accepted the admonition and thanked him for it. Later she said to us: “Did you hear what Primo Maestro said? We must have faith!”

Humility sustained Maestra Thecla also in the exercise of obedience, which characterized her religious life from the outset. Out of obedience, she accepted the office of Superior General and many times she courageously undertook initiatives that perhaps she didn’t understand. She often said: “Let us obey, obey! In this way, we will never make a mistake.”

I can also say that Maestra Thecla stood out from everyone else in the way she lived simplicity. On her visits to Asia, I was told over and over again by sisters of different Institutes and various other people: “How simple your Mother General is! How easy it is to approach her!”

Sr Elena Ramondetti (1909 - 1999)In 1937, Sr. Elena was sent to China with two other FSPs to begin the Pauline aposto-late in collaboration with the Society of St. Paul, which had a small house in Nanking. In 1938, the sisters were forced to leave the country due to the war between China and Japan. They took refuge with the SSP in Delhi, India for a few months until Maestra Thecla sent word, directing them to go the Philippines. They arrived there in October 1938, just before the outbreak of World War II and Japan’s invasion of the Philippines. The sisters spent the war years (1941-1945) fleeing the Japanese forces and carrying out the Pauline mission as best they could. Sr. Elena remained in the Philippines until she was sent to India in 1953 to serve as local superior in Mumbai (at that time known as Bombay). In 1957, she was transferred back to the Philippines, where she served as regional superior from 1957-1965 and then as provincial superior from 1965-1972.