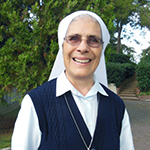 My first meeting with Prima Maestra Thecla took place even before I entered the Congregation of the Daughters of St. Paul because in all the encounters organized by the sisters of the Cagliari community, they spoke about Prima Maestra, her role in the Congregation and what she meant to each of its members. Even before I arrived in Alba, Maestra Thecla’s profound gaze had already penetrated my heart. But my first “real life” contact with her was very informal and also very surprising to me.

I entered the Congregation in Alba on 5 May 1961–a moment in which everyone was very busy preparing for Prima Maestra’s upcoming visit. All the sisters were rushing around the house and apostolate rooms, ensuring that everything was sparkling clean for her arrival. Above all, I could see the profound joy shining in their eyes, as if they were preparing for a big feast or for the arrival of a very important person.

I couldn’t contain my eagerness, joy and also a certain amount of curiosity as I looked forward to meeting Prima Maestra face-to-face.

On the day of her arrival, we all formed a long welcome line outside the house, beginning with the oldest sisters down to the candidates who had just entered. As Prima Maestra’s car passed in front of that long line, everyone burst into enthusiastic applause and songs of welcome. In the following days, I often saw Prima Maestra in chapel. She was always kneeling, her hands folded and her gaze fixed on the Tabernacle with the intent expression that was already familiar to me and which I carried in my heart.

I remember that during community recreation periods she would fold the laundry with the professed sisters or join them in cleaning vegetables with great simplicity and composure. She enjoyed their company and they enjoyed hers!

It was finally my group’s turn to have a one-on-one meeting and also a brief recreation with her. She had a good time joking with us and she asked us many questions about our families, about where we were from, etc.

When it was my turn to talk to her, I told her that I came from Sardinia. During our conversation, my formation mistress approached us with some anxiety because she said I looked very pale. Prima Maestra replied: “Don’t worry. All Sardinians have olive-toned complexions, but they are as strong as their oak trees!”

When I told her that I was the oldest of seven children, she was astonished that I had had the courage to leave my family. At the same time, she said that she admired my parents and that she was very grateful to them for their generosity in allowing me to enter the Institute.

Short as it was, our little talk immediately put me at my ease and Prima Maestra’s maternal and benevolent gaze made a profound impression on me. In the following the days, I tried my best to “run into her” along our garden walkways or in the hallways of the house, but unfortunately I wasn’t very successful!

Prima Maestra returned to Alba the following year and once more she gave us a conference, joined us in our recreations, and encouraged us to maintain our joy and serenity, to love prayer and the apostolate, and to be faithful to our vocation. Become saints! she urged us over and over again. Her gaze swept over us and when it alighted on me she came up to me and asked, “Are things going well for you?” I was taken by surprise but immediately said yes. “Go ahead serenely,” she replied. “I can see that you are well. You are as strong as your oaks!”

This is how I saw Prima Maestra and how I want to remember her: not only because of her extraordinary spiritual wealth but above all because she possessed the simple, humble and strong heart of a mother. 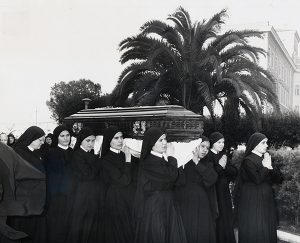 But the most beautiful grace I received from her and the “testament” she left me occurred on 3 February 1967, when the casket containing her body was transferred from the Verano cemetery to the subcrypt of the Queen of Apostles Sanctuary in Rome. The hearse stopped outside the gates of the Via Antonino Pio compound and her casket was carried with great devotion on the shoulders of eight Daughters of St. Paul, chosen because of their strength. I was one of the eight.

Three days later I left for the United States of America. My mission overseas was beginning and I felt courageous and reassured because I sensed that Prima Maestra was close to me–after all, I had carried her on my shoulders!

Thank you, Prima Maestra, for taking notice of me, for encouraging me and for sending me out to the world!