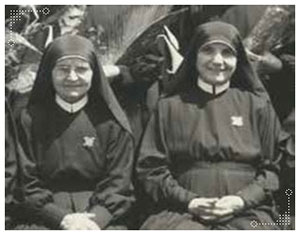 I got to know Maestra Thecla under extraordinary circumstances when I was nine years old. My mother had died and my father wanted to entrust me to the care of the Daughters of St. Paul, who had opened a house in Susa. In his letter asking if they would accept me, my age was mistakenly listed as nineteen.

So you can imagine Maestra Thecla’s amazement when she saw a little girl standing before her. She told my father very regretfully that I was too small to join the Susa community and he replied that he didn’t know how he would be able to take care of me now that my mother was dead. Deeply moved, Maestra Thecla said that perhaps an exception could be made, but first she would have to consult the Founder, Fr. Alberione, whom everyone called “The Theologian.”

From the very start, Maestra Thecla manifested a great love for me, filling the role of “mother” in my life. I was a very shy child and deeply attached to my father, but Maestra

Thecla consoled me after his departure and did everything possible to ensure that I would be happy with the sisters.

But in spite of this, I wasn’t happy. I cried and insisted that I wanted to see my family so for Christmas 1922, my older brother came to get me. Maestra Thecla was convinced that I would not return to the community so when we said goodbye she sent me on my way with great goodness, love and a pocketful of candy.

She also said that she would set aside for me the gift that Baby Jesus would bring me for Christmas. Conquered by her goodness, I returned to Susa after a brief stay with my family.

In 1924, the Susa community moved back to Alba. We, its youngest members, wondered anxiously who our superior would be. We fervently hoped it would be Maestra Thecla, whose wisdom, goodness and maternal spirit we had personally experienced. And our hope was realized, to our great joy.

We saw Maestra Thecla as a model of profound humility. I remember two instances in particular that illustrate this. The Alba community was growing and its problems increased proportionately. Perhaps there were things that caused worry because once, while the community was in the refectory, Maestra Thecla got up and asked everyone to forgive her for her bad example, saying that it was her fault the Lord was denying us his heavenly grace. She did this again on her feast day. These two acts of profound and sincere humility made the rest of us want to imitate her.

Maestra Thecla’s maternal heart prompted her to provide each sister with what she needed. I remember that she double-checked my personal belongings on several different occasions to make sure I was not lacking anything. She would often ask me how I was and urge me to be good so as to please the Lord and also my mother, whom she said was watching over me and protecting me from heaven.

At the end of World War II, FSP departures for the missions resumed. I was sent to Japan. I had wanted to go to the missions for a long time but I felt I lacked the preparation and the capacities for such an assignment. I told Maestra Thecla about my fears and she encouraged me, telling me to have great trust in the Lord. Her words, spoken with great conviction, restored my peace and serenity.

The Lord was able to do wonderful things through Maestra Thecla because she had unlimited faith and trust in him. She was a person of broad vision and her heart was as big as the world. She wanted to reach everyone, using the most powerful and effective means to draw them to the Lord. She was sensitive to the problems of society and able to read the signs of the times, seeking to adapt new instruments to the Pauline apostolate so as to do greater good.

Maestra Thecla’s last visit to Japan was an unforgettable experience for all of us. She told several members of the community that she felt this would be the last time she would see us. Our final moments with her were very moving. We clustered around her, wanting to kiss her hand and receive her blessing. She climbed the stairs to the plane and waited in the entrance until the last minute, wanting to see us for as long as possible. That last glimpse of her made us more than ever aware of her maternal heart, which burned with the ardent desire that we might all correspond to the Pauline religious vocation, which is a vocation to sanctity.

On 15 April 2013, Sr. Irene Conti, a member of our Divine Providence community (Via Antonino Pio), Rome celebrated her 100th birthday. With great joy and gratitude we offer our best wishes to this great missionary with a perpetually young heart, recalling that in the arc of her long Pauline life she took the Gospel to Japan, Korea, Australia, the United States, Taiwan and Hong Kong.
Sr Irene Conti(1913-2014)