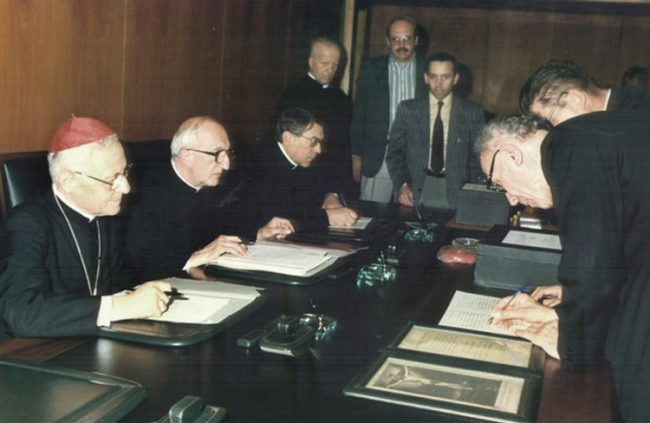 SR. THECLA MERLO: ON THE WAY TO SAINTHOOD

Alberione and Thecla: two saints who carried the newborn Congregations of the Pauline Family in their arms.

They were two different processes: that of Blessed James Alberione was conducted according to the rules set down in the Apostolic Constitution Divinus Perfectionis Magister, promulgated on 25 January 1983 by John Paul II, while that of Sr. Thecla, begun in 1967, followed the old procedure.

In the light of Maestra Thecla’s unquestionable faith, steadfast hope and total and universal love, the Positio super vita et virtuibus (Report on her life and virtues) was submitted to a commission of theological experts made up of cardinals and bishops and on 22 January 1991 the Pope signed a decree declaring that Sr. Thecla Merlo had lived the virtues to a heroic degree, conferring on her the title of  “Venerable.”

In order to beatify Sr. Thecla, who carried out the very modern and up-to-date apostolate of social communications with a contemplative spirit, a miracle attributed to her intercession must be recognized by the Church.

In the course of the beatification process, the Postulator of her cause has received several thousand letters testifying to the graces people have obtained from the Lord through her intercession. Other people from all over the world continue to inform us of the special favors and graces they have obtained through her intercession. We offer you in these pages the most significant of these testimonies.

We also invite all those who receive special graces through the intercession of Sr. Thecla Merlo to contact this website or else notify us by regular mail at the following address: