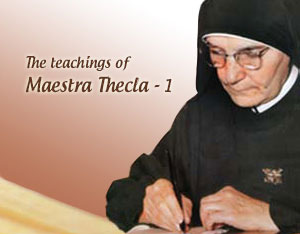 On 7 February 1964, Primo Maestro said to the Daughters of St. Paul:

Prima Maestra was not only a superior; she is the Mother of your Institute.
You will have other superiors who will carry out that office and who will follow the examples of Prima Maestra, but they will not be your Mothers.

So study her spirit, remember her examples, read what she wrote and, in particular, follow her advices and counsels, as well the conferences she gave you at the opportune moment and in such a kind and courteous way that everyone accepted what she said and carried her words in their hearts.

Maestra Thecla’s experience and teachings trace out paths of hope for our Pauline life today.

Her Entire Life in the Hands of God

Attempting to sketch out a profile of Prima Maestra, Fr. Alberione described her as a woman who never resisted the Spirit:

The Lord did what he wanted with her because as far as I could tell she never resisted his will.

She placed her life completely in the hands of God, his will! She was faithful to spiritual direction from the very beginning–from the moment she entered [the Institute] to the moment the Lord called her to eternal rest, to glory.

You know that in the last period of her illness her only words were: “The will of God! Whatever pleases the Lord! May your will be done, Lord!” She was always extremely docile. In fact, in the beginning, the one who guided her said many times: “How good and obedient this daughter is!” The Lord placed a heavy responsibility on her shoulders in spite of her frail health. He gave her an important mission to carry out, namely: to prepare souls–that is, her companions– for consecration to the Lord.

Looking back over the years, Teresa reflected on the first “yes” she said to God: the “yes” that set her life on a new and unexpected path. In one of her personal notebooks, we read:

28 June 1961
Memories: 27 June 1915. I went with my mother to speak with Primo Maestro, whom I didn’t know at the time. I was told to go home on the 28th , collect a few things and return. I missed my ride (a horse-drawn carriage in those days), so I went home on the 29th and returned that same day, I think, or else the next morning. Now, after 47 years, it occurs to me that I should thank St. Peter and St. Paul in a special way. How many graces I have received in these years! And how poorly I have corresponded to those graces. It is entirely due to the mercy of God that I am still in the Congregation!